Well having decided to put together a small homelab and purchased a HP Microserver Gen 8 for the purpose I decided to go a head with VMware ESXi for the hypervisor, some thing new and we all like a challenge right?

Well its defintely been a challange in retrospec Hyper-V might have been easier but anyway I’ll get the process down well its still fresh in my mind.

Downloaded the HP specific version of ESXi 6.5 and mounted it via ILO, install is pretty stright forward, click next a few times, pick the USB stick as install location etc, happy days until you get the “you dont have over 4GB memory” (MEMORY_SIZE ERROR) error message and it kicks you out of the installer…

Eventually worked out a way around it with the following instructions from noteis.net

So when the memory size error occurs press ALT+F1 to drop you to the command line, login with root and blank password then

upgrade_precheck.pyc didn’t exist on my install possibly being the HP version but I’ve left the step in there

When you kill python the installer restarts and you can get all the way through it, lovely job

So with the hypervisor installed time to play, started off with a Server 2016 install and so the issues began.

Wasn’t expect things to fly along on a celeron with 4GB but the install took over 3 hours, neither CPU or memory anywhere near maxed out, so looked to be a disk issue. In ESXi the max speed seen on the array was 30meg/s, installing ubuntu server and testing that showed an average of 5meg/s. Not great.

Heaps of research managed to tie it down to to crap RAID drivers in a nut shell.

Stop all your VMs, enable maintenance mode either via the web GUI or SSH to your hypervisor and

Then SSH to the hypervisor

Rebooting and logging back into ESXi I found my data store gone along with both my VMs 🙁
Checking the raid driver I found it to now be on the ahci driver, so in essence we need to disable this to force it to roll back to our 5.5.0-88 driver.

Again ssh into the hypervisor and

You can check it worked via

You should end up with this 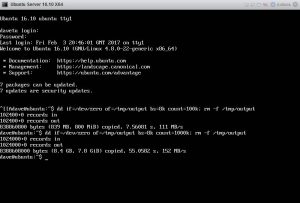 So thats ESXi 6.5 up and running on a 4GB HP microserver, more challenging than I was expecting but have to say I’m liking ESXI so far.